Mimaki today announced it will be unveiling new products and new sponsorships at shows throughout the fall season. The new CJV300 will stage its European premiere at Viscom Paris 2014, scheduled for 9-11 September in Paris (Porte de Versailles), France. Mimaki will be located in Stand D60 at the show.

“2014 has been a big year for new products at Mimaki,” said Mike Horsten, General Manager Marketing EMEA for Mimaki Europe, “but the year is not over yet, as visitors to our stand at Viscom will see. We are especially excited to be offering a new silver ink along with a brand-new printer to bring high value-added printing to manufacturers in the sticker, labeling, and packaging print industries. We are also pleased to be expanding our corporate sponsorship program in a number of mutually beneficial arrangements. And beyond Viscom, we have numerous other events on the calendar though the rest of the year. We are looking forward to sharing all of this good news in person with as many show visitors as possible.” 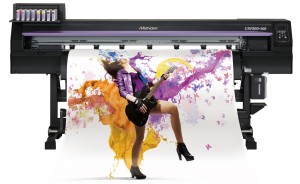 At Viscom, Mimaki will have a wide range of products on display, including the brand-new CJV300-130/160 inkjet printer/cutter, bringing simultaneous print/cut operations to this class of printer for the first time. “We are also extremely thrilled with the brand-new SS-21 silver ink available with this printer,” Horsten says. “This complements the SS21 Orange and Light Black inks introduced earlier this year and makes it possible for users to create metallic images in no less than 648 different colors with a silver underlay.” The SS21 silver ink brightness is 1.67 times greater than that of conventional silver inks for high value-added printing and ensures mirror effect results that exceed expectations.

Mimaki is also pleased to announce following newcomers to the Mimaki family as of spring 2015:

These printers will hold their European display debut at Viscom Italy, taking place October 16-18 in Milan, Italy. The printers will not be commercially available in Europe before early 2015.

Mimaki has entered into new sports sponsorship arrangements that will provide stunning graphic treatment for its partners while furthering Mimaki’s corporate dedication to key values such as speed, agility and teamwork. Sponsorships include:

At the same time, Mimaki has also engaged in a technology partnership with the Caterham F1® racing team, where Mimaki has been appointed as the team’s official graphics supplier. This means that all Formula One communications and visuals for Caterham F1® will be printed and cut using innovative Mimaki solutions, on display on trucks and in paddocks worldwide. The green flag on the Caterham partnership will be waved on the first day of Viscom Paris, taking place September 9-11 in Paris, France. The Mimaki team and booth will be dressed in racing style for the occasion.

“We are extremely pleased to be working with these three outstanding teams,” Horsten added. “They know – just as we know – that speed, agility and teamwork make all the difference. Together, we will be able to make a difference for both the teams and their fans.”

Viscom: Just the Beginning of an Exciting Fall Season

“While it has been a busy year for Mimaki so far,” Horsten continues, “we are planning a busy finish as well. There is so much good news to share that we wanted to be present in as many venues as possible.”

Mimaki will also be exhibiting at:

“We are looking forward to having great discussions with visitors to our booths at all of these events,” Horsten concluded, “gaining a better understanding of their business needs and challenges and how Mimaki can help them accelerate revenues and deliver new capabilities to their customers.”