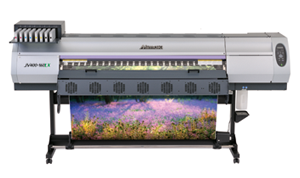 Mimaki, a leading manufacturer of wide-format inkjet printers, announces its Mimaki’s JV400 Series beat its competitors in the race to provide a wide-format latex machine in a competitive marketplace. Mimaki is also the first ever supplier to incorporate a ‘White Ink’ into their Latex wide format printer.

Image Reports editor Lesley Simpson puts it simply: “As our latest Width-Wise survey showed latex is going to be ’the technology to have’ in 2013.  If a printer has a wish list, the Mimaki latex-ink machine is on it. There has been an immediate response from the marketplace to the JV400 with the ‘white-ink’ option. This opens up the competition – latex is where the money is – it will become the biggest investment area.” The machine was launched at FESPA in 2012 and comes in 2 print widths. Mimaki has also demonstrated a version of the machine combining solvent and UV inks to gain a glossy finish.

The Mimaki TX500-1800DS also won an Angel Award for innovation due to its capability to print direct to textiles and pre-treated polyester fabrics.  As Lesley Simpson remarked, “It has six printheads in a staggering configuration and uses Mimaki’s new Sb300 sublimation inks in either 6-col or 4-col modes. The build of the machine is clever in the detail – it’s way ahead of its competition.”.

Mike Horsten, Marketing Manager EMEA at Mimaki Europe, and Duncan Jefferies, Marketing Manager at Hybrid Services, are in seventh heaven with these Angel awards. “What a great industry recognition for our technology – we’re delighted about this award and look forward to further introducing it to the market at key trade shows like Fespa Digital 2013. See you there!”

The Mimaki TX500-1800DS will be available soon in the EMEA region.