Keeping It in the Family

Spandoeken Centrale Nederland has been a prominent 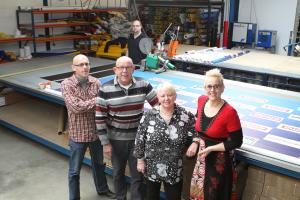 operator in the sign industry for more than fifteen years. Initially the company only supplied blank banners, but now it also delivers full colour banners and tensioning systems. What hasn’t changed though is the family concern’s drive and dedication to the business. “Direct communication, few organisational layers, speed and a constant focus on quality.”

When he became fifty Doeije Attema decided to start all over again, this time working for himself. Even though Spandoeken Centrale Nederland was launched fifteen years ago, to him it still feels as though it happened yesterday. In previous years he had been working in the foil trade and was, amongst other things, a representative in Germany and the Netherlands for the Italian manufacturer Apa Spa. “Eventually I was selling a large number of banners also manufactured in Italy.” From rented premises in Enschede, Doeije and his wife Jannie, who managed the accounts, ran Spandoeken Centrale Nederland offering their services direct to the sign market. Attema comments: “Using a welding machine copied from Italy we were able to apply edging to single 50 m lengths between 60 and 120 cm wide. In those days we were the only ones who could do this. It didn’t matter whether the order was for ten or fifty banners. Providing we received the order before 12.00 hrs it would be delivered the next day.” Son Dave, who joined the company a year later comments as follows: “Short turnaround times are still our main strength.” 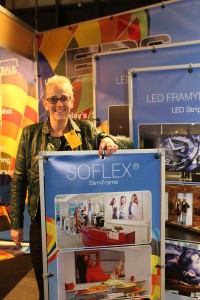 When daughter Marjolein also joined the company in 2002 it really became a family concern. The current premises at Zomerweg in Enschede were acquired in 2004 and another hall was added two years later. “We now have a production area of approximately 750 m2 and 100 m2 office and storage space, and our workforce comprises seven people”, states Dave. This does not include the senior generation, Doeije and Jannie, because they decided to withdraw from the business on 1 February to enjoy a well earned retirement. Dave smiles: “Having said that, my father is still the fastest welder around and always ready to give a helping hand. Our parents’ strength lies in the fact that they built up the business step by step. With integrity, they only ever needed a bank to get a mortgage.” For almost a decade Spandoeken Centrale produced and sold about 100,000 m2 of blank banner material annually. “But the arrival of digital printing technology also had an impact on our business”, Dave and Marjolein add. “In many cases the printer has already finished its job when you’re still peeling foil. The sale of blank banners slowed down and, being a middleman, we couldn’t offer much added value in terms of print media. You are forced to compete with the mighty operators in the Far East. And that’s impossible.”

We decided to change course and invested in two digital Mimaki JV33 solvent printers (1.60 and 2.60 m wide). Spandoeken Centrale is now in a position not only to produce blank banner material, but also to supply full colour banners to sign makers. Dave relates: “We are still a production company acting as a supplier. Sign makers able to print 1.30 or 1.60 m themselves, can rely on us for 2.60 m formats. We also print stickers and flags. Our prices are competitive but we are not operating at the lower end of the market. There is a limit. If you want to deliver quality and service you need a specific margin.” Marjolein adds: “This strategy is paying dividends. Fortunately we have many loyal customers who recognise and appreciate this. Personal contact is important. In the unlikely event of something going wrong, we immediately try and solve the problem.” Meanwhile approximately 70 to 80 % of our turnover is generated by front lit full colour and mesh. “We also have the expertise to offer double sided printing, for example on 840g Bisonyl canvas in block-out quality, i.e. for oblique building flags.” 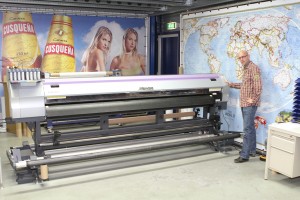 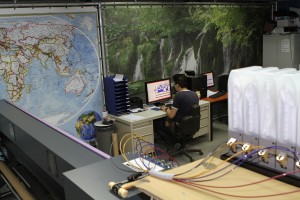 Spandoeken Centrale Nederland also aims to stand out from the crowd with its extensive product range. Freestanding tensioning systems, blind frames, canvases (blank or printed), LED lighting systems and many other accessories. “We offer everything associated with banners under one roof”, says Dave. “The sign maker uses his creativity and we produce it. Where necessary we can provide expert advice and arrange the installation. And we continue to expand our product range.” Dave relates: “Many customers don’t even know how much we have to offer. We intend to change this, hence my presence on the road two days a week. Personal contact is the key and I have many more ideas.” 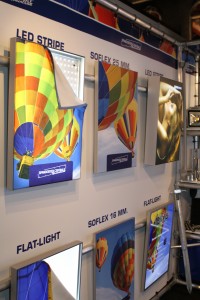 Spandoeken Centrale Nederland has various sign systems in its range, including the unique Easylight Display System ( EDS ), a lightweight modular display system that can be produced in any format and quickly (dis)assembled. Spandoeken Centrale Nederland has recently also become a Blindframe dealer. A lightweight modular aluminium frame system, with the frame and elastic tensioners concealed at the rear. Other products they offered include the Soflex Slim frame for indoor textile canvas applications, the Triaframe, Framylight Led Stripe and Framylight Flatlight.