Faster production, shorter lead times and more flexibility were some of the benefits for Shortcut Labs when they began to print with the Mimaki UJF-3042MkII. “I wish we had discovered it earlier”, says co-founder Amir Sharifat.

It was almost by coincidence that three young Swedish technology students met in 2013 and together developed Flic, the market’s first Smart Bluetooth Button. In the era of “Internet of Things”, when the interest in online homes started to sprout, Flic quickly became a multi-million dollar affair with partners and production sites all over the world. With a short click, double click or a long hold, consumers and businesses in more than 110 countries would be able to control lighting or music, call for a taxi, order room service and call for help, all with a simple click of a button.

As the business grew, practical issues in the production required new solutions. One of the most urgent ones was to find an efficient and reliable printing solution for the growing number of individual customers who requested customised print, and corporate customers who wanted to have their brands printed on top of the plastic buttons. “As the Flic-buttons are produced in Malaysia, we hired a screen printing company who was based there for the printing services. It was taking several weeks, sometimes months, of sending samples back and forth numerous times to Malaysia to get an acceptable logo with the right colours. With an increasing number of business customers, the lead times were no longer acceptable,” says Amir Sharifat.

Thoughts of bringing the printing in-house started to grow, and during a printing convention in Stockholm 2016, Sharifat met with Mimaki’s Swedish reseller, Signcom, to discuss UV-printing. “I had read about Mimaki and knew that they were one of the biggest print suppliers in the market. We were introduced to the UV-printer Mimaki UJF-3042MkII, four colours plus white and varnish, 1200 x 1200 dpi, which really suited our needs. UV is essential because the print on our products needs to be scratch resistant. We calculated that printing more than 2000 buttons in one year in-house would be profitable and so we went for the leasing option of one Mimaki UJF-3042MkII,” says Sharifat, who emphasised the importance of flexibility in a forever changing future.

After a successful installation, the technicians and IT-experts in the Shortcut Labs team have all gradually become printers. “We were a bit anxious at first – is it going to be difficult to learn how to print? How much daily maintenance will the new printer require? All we wanted was to find a useful tool without having to focus too much on the machine itself. With guidance from Signcom, I learned how to run it and now everyone in the company is involved in the printing jobs,” explains Sharifat, while demonstrating the Mimaki UJF-3042MkII with a 30 x 42cm table size placed in a corner of his office. 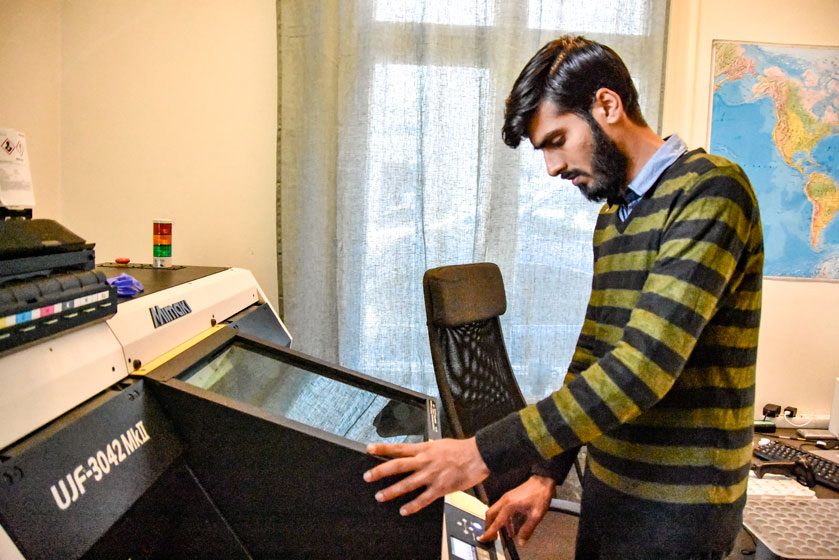 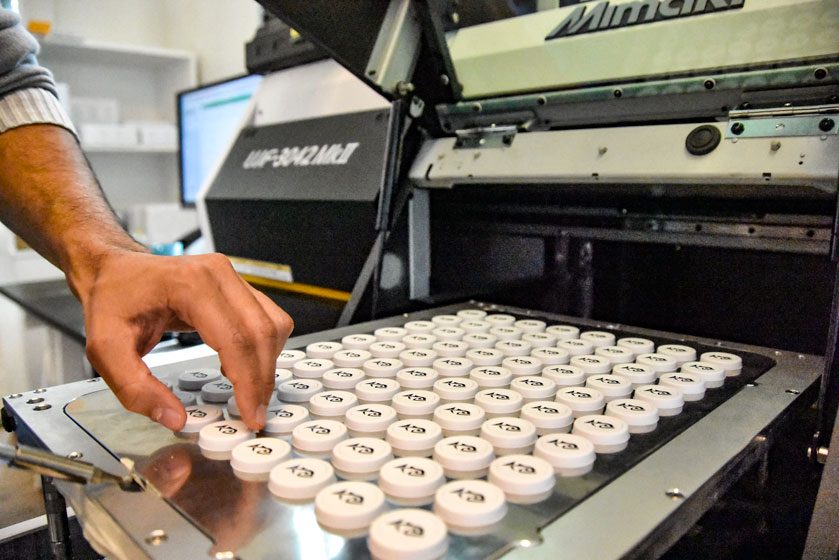 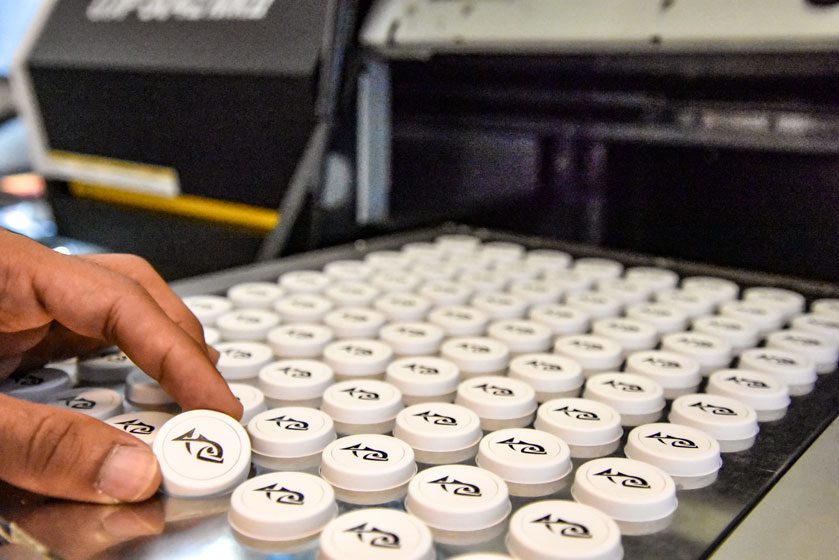 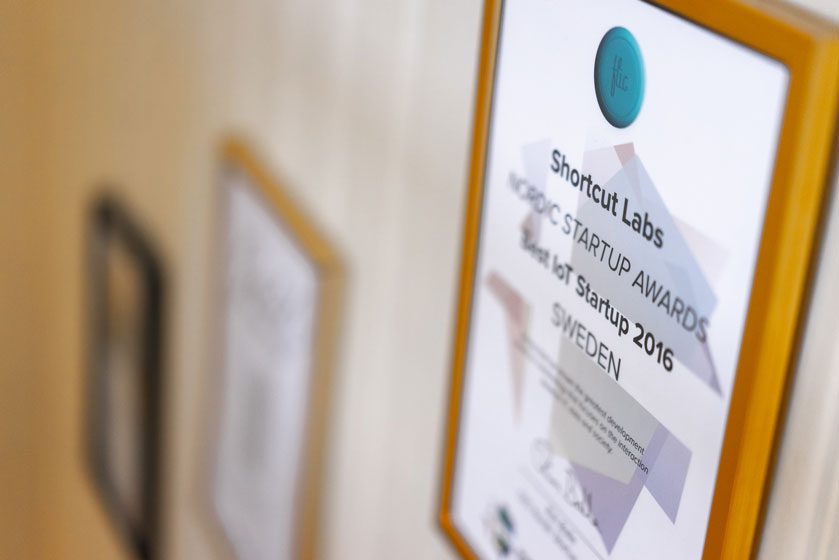 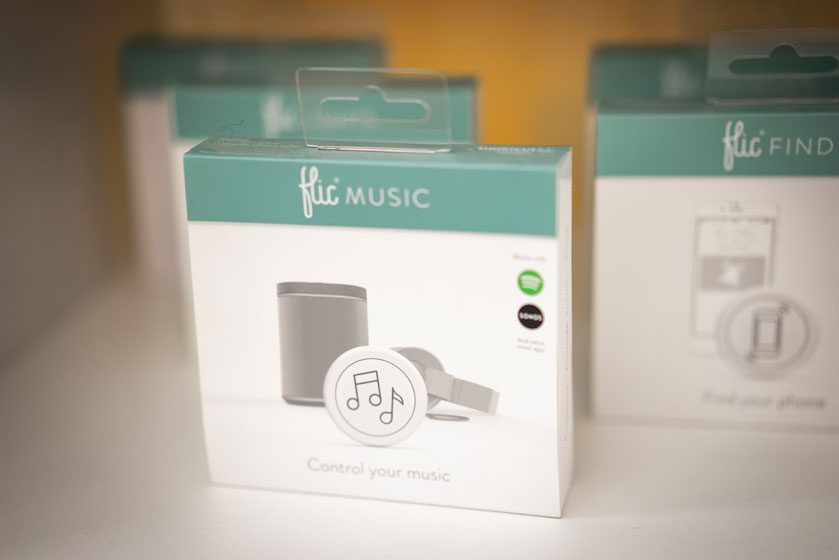 Today, the Mimaki UJF-3042MkII runs at least twice a week. Eighty Flic-buttons fit in one print run that takes 7 to 15 minutes to complete, depending on the resolution and varnish. To keep the buttons in place during the printing process, Shortcut Labs has developed a customised jig that fits into the machine. The only daily maintenance staff has to deal with is cleaning around the three print heads and the capping station after printing. “Handling the Mimaki UJF-3042MkII is easy and the print quality is impeccable. The products come out dry and ready to be sent out immediately thanks to the fast drying flexible UV LED-ink that Signcom has provided us with,” states Sharifat. He underlines that printing in-house has contributed to better service and new business opportunities for both Shortcut Labs and their customers. “Now we are able to handle smaller orders better and the efficiency in logistics has improved considerably. It has been very profitable and we regret that we didn´t make this decision a year earlier. If so, maybe we would have been another year ahead in our business development by now.“