The JV400 Series from Mimaki Engineering Co.,Ltd, a leading manufacturer of wide-format inkjet printers, is proving popular with printers across the world, with global sales surpassing 200 since its launch at Fespa in February 2012.

The JV400 is also fast earning the respect of experts in the print industry – the system recently walked away with a coveted European Digital Press (EDP) Association Award, after being named Best Environmental Printing Solution. The judging panel cmmented: “With the new piezo head, the viscocity of the ink is higher, meaning less drying time. Combined with the white ink option and lower energy consumption, the Mimaki JV-400LX is a worthy winner.”

Mike Horsten, Marketing manager at Mimaki Europe, comments: “The JV400 was incredibly well received when it was launched at Fespa, and since then its popularity continues to grow. Word is certainly spreading about what it can deliver.”

“And for the system to receive a highly respected industry award so soon after its release was very encouraging. We very much respect the opinions of experts in the industry, so to win an award was very satisfying.” 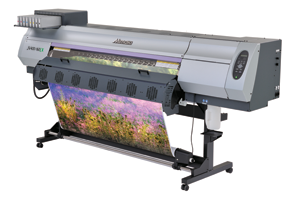 Exceptional quality is guaranteed by a minimum dot size of 4 picoliters, and the ability to use variable-sized ink dots for smooth gradation without a grainy appearance. The system operates at an impressive speed .

Meanwhile the JV400-130/160SUV is a revolutionary inkjet printer that blends the flexibility of solvent printing with the durability of UV-cured inks. It prints in four colors (CMYK) at speeds of up to 18 square meters per hour.

In the printing process, the solvent component is absorbed by the ink-receiving layer of the media, and the pigment is settled into the media. Printed ink is then cured via a UV process, resulting in a smooth, glossy appearance that simulates a coating, while retaining the bright colors expected of a solvent printer.