Mimaki reported a successful conclusion to its presence at drupa 2012, the world’s leading print exhibition, where the company launched a number of new products. Attendees provided very positive feedback about the Mimaki’s new JFX500 series, a next-generation high-speed UV-LED flatbed inkjet printer, the new JV400-LX, a wide-format printer that uses low curing latex inks, and the new JV400-SUV, an inkjet printer equipped with solvent UV ink. Visitors to the Mimaki stand were especially impressed by the quality, speed and low curing temperature of these innovative systems.

Another highlight for Mimaki was the impressive amount of sales generated , reinforcing the value of Mimaki solutions in today’s highly competitive sign and display graphics and textile printing markets. 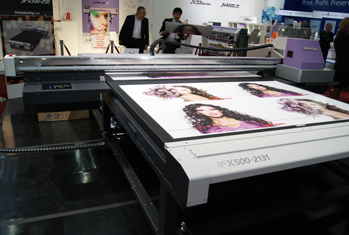 JFX500 impresses on its debut

The unveiling of the new JFX500-2131, a next-generation UV-LED flatbed inkjet printer, was a major attraction at the Mimaki stand. A high-speed, high-quality printing system, the JFX500-2131 offers excellent output – up to 60m2/h in four-colour mode, and up to 50m2/h with white ink – and faithfully reproduces fine details including crisp print as small as 2 points.

Its large flatbed – 2,100mm x 3,100mm – enables direct printing on a wide range of materials up to a 100mm thick. And its UV-LED curing unit ensures significantly improved curing-efficiency – high-speed printing is now possible without leaving behind uncured ink. In addition, the low curing temperatures associated with LED curing mean that the printer can handle a wider variety of heat sensitive substrates than printers with normal UV curing.

Mimaki was pleased to play a role in a key highlight of drupa 2012, the ‘The Dance for the Digital Age.’ This stunning performance played to packed audiences in the Landa Nanographics stand several times per day during the entire two weeks of the show. It depicted historical milestones in printing. All of the fabric for the dancers’ striking costumes was printed on Mimaki textile printers. 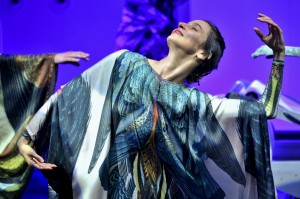 Mimaki textile printers are the world’s fastest dye sublimation systems. They can print at 150 square meters per hour on transfer paper as well as direct to pre-treated polyester fabrics without the need for an interim transfer paper step, all without any compromise in quality.

The vibrant costumes used in the dance show clearly made a big impression on these large audiences – Mimaki’s Polish dealer sold three of Mimaki’s textile printers , one of many sales the company closed during the show.

Mike Horsten, Marketing Manager at Mimaki, comments, “Drupa 2012 was a huge success for Mimaki, and we’re very proud to have been part of this prestigious event, which was clearly the star of the show. We secured some impressive sales and generated many strong leads, as a result of the significant number of attendees that spent time in our stand during drupa checking out the new technologies offered.”

“It was very rewarding to be able to launch so many new products and see them so positively received by visitors to our stand. We are thrilled with the positive feedback we received on the JFX500 series, a next-generation UV-LED flatbed inkjet printer, and the new JV400 series, which offers the option of latex or solvent UV inks.”