With ISO14001 certification and a group-wide commitment to recycling and environmentally sound initiatives; investment in additional digital print capacity for high profile Cardiff sign and graphics company, Morgan Signs, stood a good chance of pointing towards a latex printer, but it wasn’t just for green reasons that it chose a Mimaki JV400. 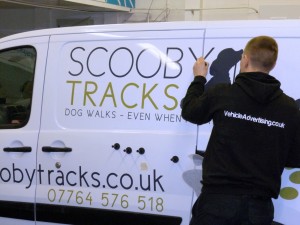 Having invested in a Mimaki JV3 in the mid 2000’s, Morgan Signs increased its capacity in recent years with a JV33 and has a quiver of Mimaki cutting plotters, laminators and other high end kit that serves both its sign making arm and the newly formed PopIn Vehicle Graphics that specialises in fleet liveries and vehicle branding.

PopIn Vehicle Graphics is based in the same, substantial premises as the rest of Morgan Signs’ operation, but has an impressive climate controlled double vehicle bay that is ideal for preparation of vehicles and installation of vinyl graphics. Formed in early 2013, the subsidiary focuses entirely on vehicle liveries, employs a team of four specialist fitters and is headed up by MD Craig Lovegrove. “Although it wasn’t much of a decision to stay with Mimaki when we were looking at a new wide format printer, there was still a distinct decision making process that we went through,” Lovegrove recalls.

“We had to offer faster turnaround times, so removing the need to out-gas prints meant latex was top of the list,” he continues. “We looked at all the latex options and although alternatives initially seemed better at face value, once we dug a little deeper, the Mimaki had a number of compelling factors that made it an easy decision in the end.” 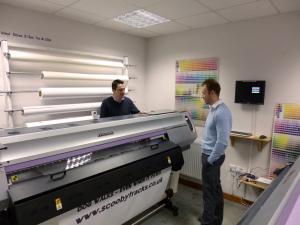 MS Group has received advice from Shaun Thompson of authorised Mimaki reseller, Graphic Printing Technologies over a number of years. MS Group’s operations director, Rod Hill, details the decision making process further, “The Mimaki latex printer has very low running costs. We’re able to select from a huge range of materials and the output quality is head and shoulders above the competition.”

Hill continues to emphasise how working with Mimaki’s UK distributor, Hybrid Services fits well with MS Group’s commitment to considering environmental factors in its operations. “Morgan Signs
identified waste streams and Hybrid’s “Let’s Do MORE” rebate linked recycling scheme has been a significant bonus for us.” The scheme focuses on recycling Mimaki solvent ink cartridges and for
the two Mimaki solvent printers that MS Group uses, it allows the company to advise prospective clients that it’s following Hybrid’s lead and “doing something where it can.”

“The construction industry is a big market sector for Morgan Signs and it’s driving recycling as part of a moral and commercial obligation,” continues Hill. “With our approach, allied to the company’s production

setup and ISO certification, we become an attractive proposition.” The Mimaki JV400 latex printer used within the vehicle branding operation ticks a multitude of eco positive boxes, but that’s just one of the many benefits that the boss of PopIn Vehicle Graphics is finding. “The smooth gradients, drop shadows and colour matching we’re getting from the Mimaki RasterLink RIP software is so good that our production time has sped up even more,” says Lovegrove. Simple, but very effective applied vinyl jobs that may once have been constrained to a limited range of off-the-shelf cut vinyl colours are now printed, laminated, cut out and applied in a seamless process, tied together with Mimaki’s software package for the latex printer and cutting plotter.

PopIn Vehicle Graphics is fast becoming a firmly established sub-brand of the well renowned Morgan Signs operation and Lovegrove summarises how it’s already gaining a reputation for winning repeat business. “We’re offering professional design, have a team of highly trained fitters, use only the best materials and with the new Mimaki latex printer can install a product faster, that’s better than anything else out there.” 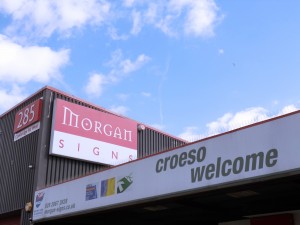 Since its establishment in 1996, Morgan Signs has found success as a result of few key principles:

Respect for its clients, pride in their work and recognition of their staff. Located in Cardiff, the company create high impact, high quality signage for every market sectorand aim to provide practical sign and graphic solutions. In the process,