German sign and display provider, Bildkraft, creates clever effects for day and night displays, previously impossible to achieve, thanks to the UV inkjet printer UCJV300-160 from Mimaki. Multi-layer printing has clearly increased the intensity of backlit illuminated signs for the company.

One illuminated display, two different images: a panoramic alpine view with mountain tops and a deep green lake by day, a tropical beach with palm trees and foaming surf at night. These are the two magnificent images on an illuminated display that can be changed with a simple flick of a switch. There is no need for any kind of roller mechanism or other elaborate image-changing device. The Mimaki UV inkjet printer UCJV300-160 makes this possible with its multi-layer printing. “We are really impressed with the image display effects that we are able to print using our new Mimaki machine. We have never seen anything like it before”, explains Björn Blum, owner of German sign and display provider, Bildkraft. As an expert in advertising technology, he speaks from experience.

He has been printing and cutting wide-format images exclusively on the new Mimaki UV inkjet printer since the beginning of May 2018, having chosen the seven-colour version with CMYK, light cyan, light magenta and white in order to be able to offer backlit effects for illuminated signs on a whole new quality level. The company took action when its previous inkjet printer from another manufacturer was starting to wear down. What remained on the shortlist was a latex printing solution and the UV-curing inkjet printer from Mimaki. Even though the latex option would have been cheaper, Björn Blum decided to go with the UCJV300-160 print-and-cut solution Mimaki announced the previous year. “We spent an entire day with DP Solutions, our incredibly patient reseller, printing our own images on our own substrates, all across the board for hours on end. And then the dye was cast”, Blum recalls.

UV print that looks like it has been varnished
In his view, the print quality and extended colour gamut of six colours plus white make a crucial difference to the brilliant colour and image display. Whilst solvents and latex inks penetrate the substrate and can therefore flatten or “drown” the image, UV ink is cured on the surface without loss of colour brilliance. One of his team’s test images at DP Solutions was a 2.5m print in spot colour blue, which can be a tricky colour as it tends to give a blotchy appearance when applied to a large surface area. “The result was absolutely flawless. It looked like it had been varnished”, outlines Blum. Even during testing, the Mimaki printer demonstrated its strong reliability with its robust industrial printheads.

One of the most exciting applications Bildkraft produced on its Mimaki printer, following the quick installation (in a single day), was a 2.5m tall and 1m wide illuminated sign in the shape of a nose for a local beauty salon. The inverted print on transparent film was then coated with 12mm of acrylic glass. White overprint eliminated the need for coloured interleaf film, saving an entire process step. Other applications Bildkraft will now only undertake with their Mimaki UV printer include vehicle wraps with colour gradients. “The colours appear much more intense and vibrant on the adhesive film, which our customers confirm unanimously”, says Blum. 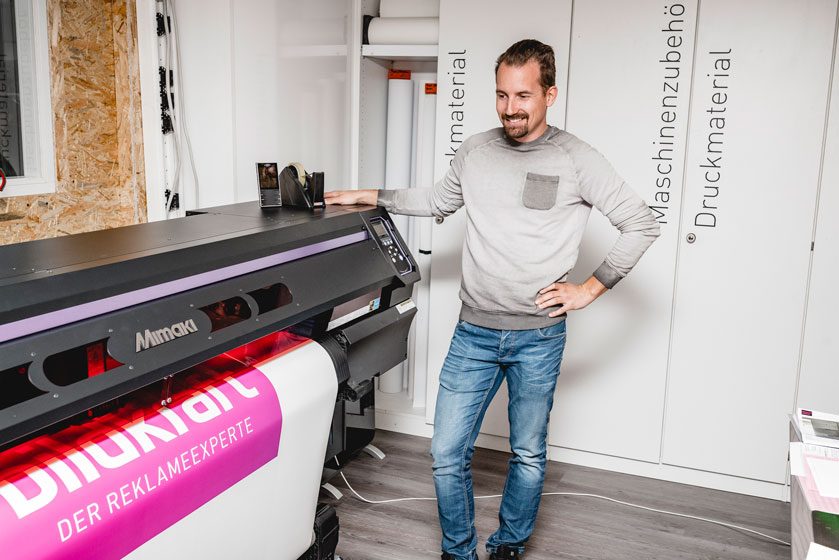 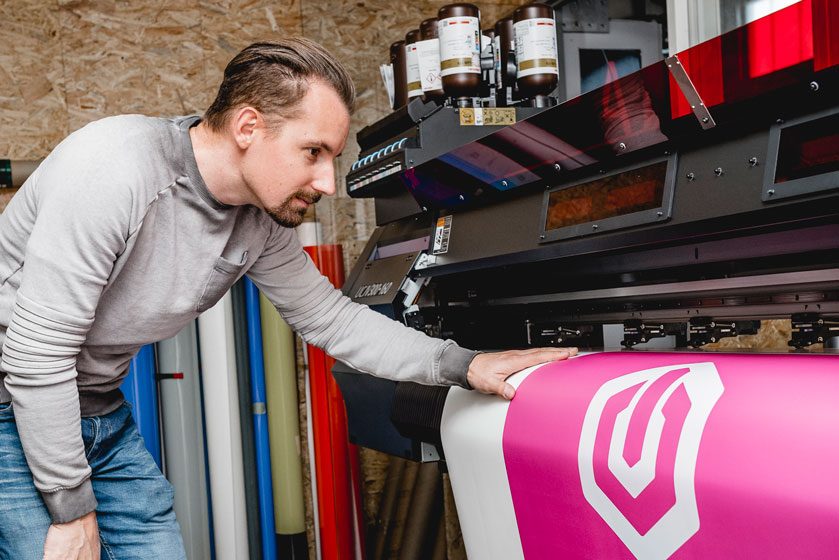 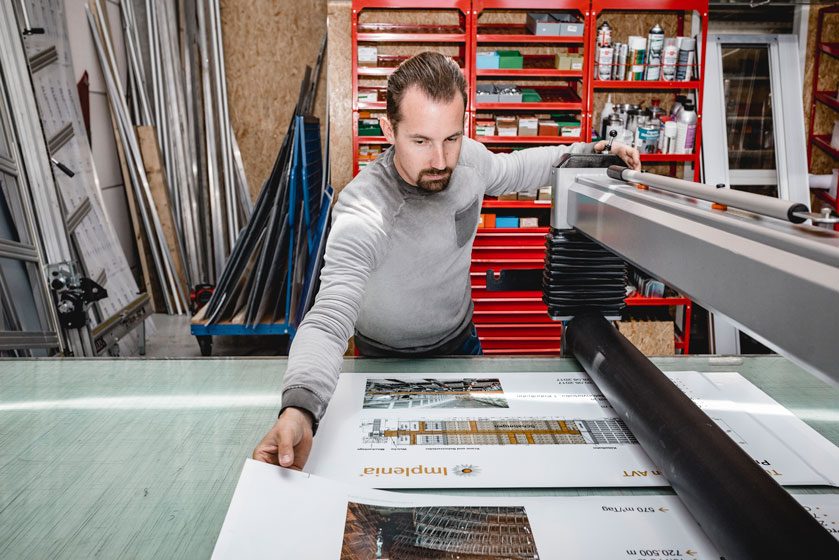 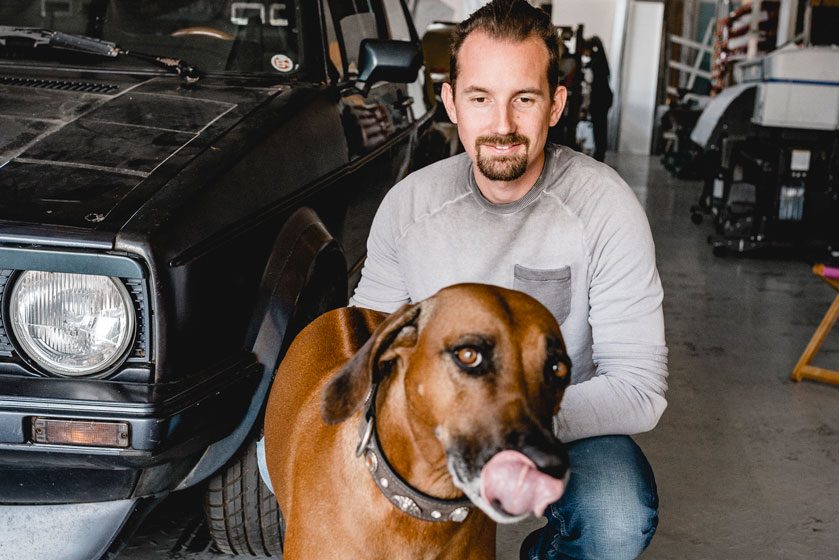 Technology + craftsmanship = success
Bildkraft is based near Stuttgart, Germany, and boasts more than 100 years of experience in signmaking and displays. Starting out in the signmaking business in 1905, the company produced the first illuminated displays a few years later. The company, as it exists today, was formed through the merger of lettering firms Wiedmann and Bliederhäuser. Björn Blum has been managing the business since 2010, choosing an impactful, future-oriented name, Bildkraft, meaning ‘image power’, to reflect the new opportunities in the sign and display arena. The core competencies of the five-strong team include custom-made illuminated displays for industrial organisations and service providers from the Stuttgart area and across Germany. Customers include Audi, Bosch, Wirtgen Group, banks, car dealerships and football club VfB Stuttgart. “We differentiate ourselves from LFP print providers who have to compete with low-cost print services from abroad. With all the technology we apply, we are ultimately a crafts business continually creating new and individual solutions for customers – therein lies our strength.”

An all-round printer with classy extras
Mimaki first presented its combined UV printing and cutting solution at the key signage shows in 2017. The UCJV300-160 is now considered an all-round machine for print-and-cut applications in sign and display advertising. UV curing enables printing on film, banners, paper and thin substrates that are too heat-sensitive for latex and solvent-based systems. One of the printer’s USPs is the combination of white and coloured ink on transparent and translucent film. This multi-layered printing creates the day and night effects on illuminated banners that Bildkraft offers to its customers. The UCJV300-160 has a print width of 1.61m and a maximum resolution of 1200dpi. It operates at a speed of around 25m2/h in draft mode and 8m2/h in standard mode. The UV ink dries immediately and is extremely scratch-resistant.